Shoulders and Back
Ann Sandberg 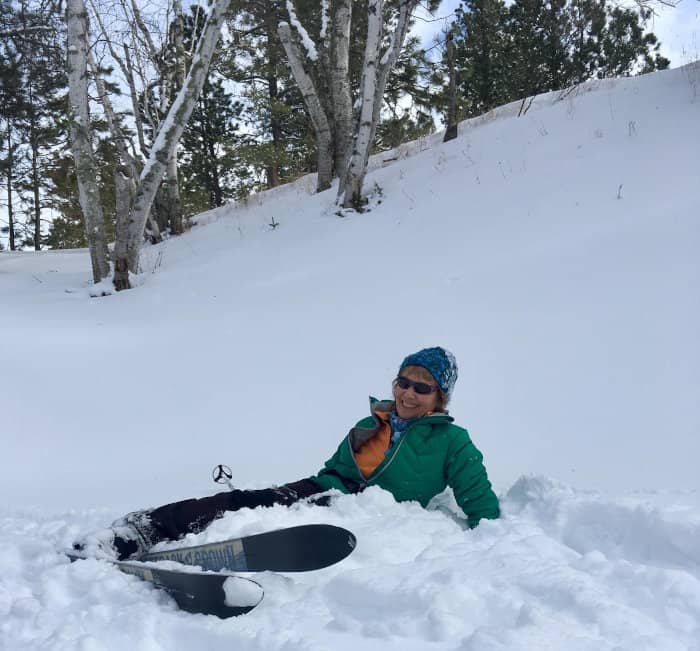 “Well…should I just go home and shoot myself?

(Did I really say that out loud?)

I was in the office of Dr. Rudy Herrera, Medical Director at Riordan Medical Institute. He just explained to me, in vivid Technicolor terms, an MRI of my neck. My doctor in Rapid City had gone over it with me, but not like this. I was blissfully oblivious of what I was really facing when I made my appointment for stem cell injections at RMI.

I was no stranger to this clinic; three years earlier, they had provided stem cell-augmented shoulder reconstruction to me, a Master Swimmer, who could no longer lift my arm out of the water to swim. I was back in the water swimming a 3-mile open-water race at seven months, and I was confident that, if anyone could help me, it was RMI.

We talked some more. I had four cervical vertebrae that looked like they wanted to fuse into one long bone. Their irregular outlines were bulging against the tube of fluid that surrounds and protects my spinal cord. If it got worse, he explained, I could develop weakness in my left arm. I could hardly turn my head from side to side as it was, and distance swimming with my Water Brothers and Sisters – my favorite thing – had become out of the question. I hurt all of the time. I wanted to cry.

What happened that gave me, a robust 66-year-old athlete and adventurer, the neck of someone in her 80’s?

It all started when I fell onto cement from our swing set when I was four. I was hanging there by my knees and I must have let go. I don’t remember much, except my dad laying me on the kitchen counter and putting an icy cold washcloth on my forehead. I was bleeding there, and he didn’t understand that the bigger injury was at the base of my skull.

I had severe headaches throughout my childhood. Kids can’t really articulate how much they hurt. I would go into a bedroom and lay in the dark, sometimes declining food that I normally loved, like cinnamon rolls fresh out of the oven. In high school, I began to rely on Tylenol 3 when the headaches were unbearable. In college, I had a brain scan to see what might me causing my pain, but nothing unusual was found. In my 30’s, I discovered chiropractic, which helped enormously for many years. But, during those years, I had a couple of bad falls on a snowboard…and chronic pain became a way of life.

BUT – when I couldn’t swim: This was SERIOUS!!

Dr. Herrera and I kept talking. His succinct description of my condition, his realistic assessment, and his genuine compassion made me want to trust him even more. He explained his plan to give me 11 injections, and told me that his best expectation would be a 40% reduction in pain, and an arrest of the disintegration of my cervical spine.

I signed on the line.

The next morning, I was prepped with an IV line before they flipped me facedown. The next thing I knew, I was awake and it was all over. Dr. Herrera came into the recovery room and I asked him if he was able to give me the 11th injection into my AO joint – the one at the base of my skull. This was the site of my original injury, and the spot that always hurt the most. Before the procedure, this was a “maybe”; the decision would wait until he could view it, with the help of the C-Arm. He told me he got it. That put me back on Cloud 9!

We made plans for a phone call in six days, and I returned to my hotel to rest. My neck was tender to the touch, and I had bandages stuck to my skin along my hairline. Other than the tenderness, I was sleepy, but felt just fine for the rest of the day. I applied an ice pack to control pain and swelling, and later went for a walk and out for dinner.

On Monday, I had my first appointment with my physical therapist in South Dakota. She took really good care of me; reducing pressure on my vertebrae through exercises, gentle stretching and interferential current stimulation. I left there feeling better than I had in a very long time. As explained in my aftercare instructions, the Signature Cord product was having an immediate anti-inflammatory effect, and I was basking in the glow of its amazing presence. Although this effect is temporary, I welcomed the relief.

I rest well, knowing that umbilical cord tissue product is gearing up to engage its “magical powers” to help me heal.

I was really looking forward to speaking with Dr. Herrera today. We had our appointment over the phone. I had many questions! I wanted to learn about where he actually placed those eleven injections of healthy umbilical cord tissue, and I wanted to understand his reasoning. He did not disappointment me on either front.

The AO joint, he said, was very arthritic. I was pleased and extremely relieved that he was able to access this area with the needle! As I understood from his comments, he was a bit taken when he actually recognized and confirmed the long-reaching ramifications of such an early-age head injury. Somehow, I felt validated by this simple sharing of his thoughts regarding me, and what I have been through.

I was aware of his plan to inject along the facets C4/5, C5/6 and C6/7. This intervention was to stimulate cartilage growth where my bones were rubbing against each other. The area received six injections.

He gave me two injections in the epidural space along the same facets to treat my discs, which were inaccessible by any direct route, due to the declining state of my discs and vertebrae.

My loss of flexion and extension in the most damaged part of my cervical spine had caused the posterior chain of muscles to atrophy. This process is concurrent with any loss of blood supply, and hence oxygen to the tissue. The last two injections went into the muscle bellies in the paravertebral zone. Their presence may stimulate angiogenesis, or re-vascularization, of the muscle tissue. If successful, the muscles will then be able to redevelop the strength to support my neck, as they are designed to do.

Want to learn more about how stem cell therapy is disrupting medicine and transforming lives?